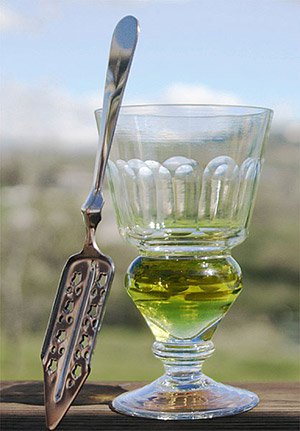 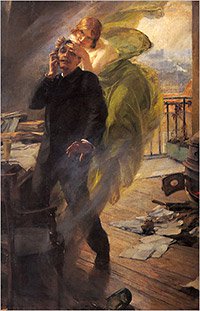 The name La Fée Verte, translated as The Green Fairy, is thought to have originated in absinthe's earliest days when it was used as a cure-all, a sort of magical elixir with assorted claims as a health remedy. The name took on new meaning when absinthe was later believed to be more akin to a psychotropic drug. In any case, absinthe is often green, though it can also be colorless.

When absinthe was most popular in France, 5 p.m. was called l'heure verte, "the green hour", as people from all social classes filed in to bars, bistros, cafés, and cabarets to consume it.

How is Absinthe Consumed?

Traditionally, absinthe will be diluted before being consumed. The two primary methods are the traditional French Method and the contemporary Bohemian Method.

Using the French Method, dilution is achieved by dripping or drizzling ice water over a sugar cube suspended on a perforated spoon atop a glass containing the 1 part absinthe. This is done slowly and deliberately in order to mix everything evenly. The process brings out some of the botanical ingredients, which gives the drink a cloudy or milky appearance and enhanced flavors and aromas. A typical dilution is 1 part absinthe and 3-5 parts water. Special drinking glasses have a bulbous lower section meant to be filled with absinthe, usually holding 1 ounce, making it easier to pour this method precisely.

The Bohemian Method is a modern twist on absinthe preparation, and receives a lot of attention because it involves fire. As with the French Method, the sugar cube is set on a perforated spoon, except it has been presoaked in absinthe and is then set on fire. Next, the flaming sugar cube is dropped into the absinthe below, which of course is also set on fire. The last step is to douse the whole thing with a shot of ice water. The Bohemian Method was never performed in absinthe's heyday, and this method is decried by many connoisseurs as unsafe due to the high alcohol content of the spirit. While some claim it results in a stronger flavored drink, others claim it ruins the flavor.

Is Absinthe a Liqueur?

No, absinthe is a spirit. Because it is not traditionally bottled with added sugar or sweetener it is not a liqueur. Unfortunately, as of this writing if you search Google for a definition of absinthe it defines it as a liqueur and even lists it as still "largely banned".

Is Absinthe a Hallucinogenic? 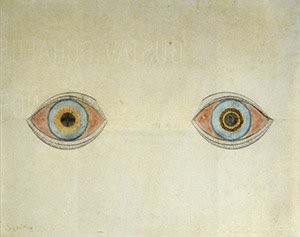 No. Despite dubious claims by Vincent van Gogh and Oscar Wilde, absinthe is not hallucinogenic and never has been. Antiquated notions of absinthe's powerful psychoactive properties have been disproved repeatedly. Hallucinatory effects are now attributed to poisonous adulterants– lower quality, likely poisonous ingredients used to dilute cheaper versions of absinthe during the 19th century.

No. Absinthe's reputation has been tied closely to speculative science, particularly with regard to thujone (pronounced "thoo-jone"). Thujone naturally occurs in wormwood, also known as Artemisia absinthium, which is used to make absinthe.

High doses of thujone can have bad side effects, like seizures and even death. But there are not high doses of thujone in absinthe, and there never have been. Modern testing of early absinthe has shown equal or lesser amounts than those in the modern day drink.

Regardless, the amount of thujone allowed in absinthe is regulated here and abroad, and you will die of alcohol poisoning long before you are physically able to consume harmful quantities of thujone from distilled absinthe.

If you are a 150 lb. man in the U.S., you will need to drink almost 2 full liters of undiluted absinthe before you have the most minor, measurable side effect of thujone – slight loss of concentration. If you are looking for a fatal dose be prepared to drink 10 liters, or over two-and-half gallons of absinthe. Your liver will have given out from the alcohol content alone long before you get there.

One note of warning, however: there have been reports of amateur absinthe hobbyists damaging their health with disreputable home kits. Always do your homework and distill responsibly!

Is American Absinthe the Real Deal?

Yes! Though most countries do not have a legal definition of absinthe, that's irrelevant. American absinthe is "real" due to ingredients and craftsmanship – not some technicality. If you are told U.S. absinthe is not authentic, it's likely based on a misunderstanding of the relationship between wormwood and thujone.

Here's the deal. Absinthe was banned here until fairly recently. The ban was lifted in 2007 when the federal government finally got around to regulating it. But because they have not truly studied absinthe, they have set a low thujone limit, much lower than the European Union: 10mg per liter max compared to 35 max overseas. That's low enough for the Alcohol and Tobacco Tax and Trade Bureau to consider U.S. absinthe "thujone-free".

So the argument against U.S. absinthe goes something like this: thujone-free means wormwood-free, which means it's not absinthe. Wrong.

It's a simple misunderstanding. The amount of thujone is not proportional to the amount of wormwood. One producer can use more wormwood than another and still have a lower thujone level. So the assumption that U.S. absinthe does not contain wormwood because it's "thujone-free" is completely false.

Highlights of the TTB guidelines for absinthe:

The importation, distribution, and sale of absinthe in the U.S. is permitted with respect to the following restrictions:

I'm Ready to Try Absinthe, Where Do I Start?

As with any food or beverage decision, the choice is yours! There are many "Top Absinthe" lists online, as well as reviews and ratings. We always prefer to buy local products, so if you have locally produced absinthe in your area, give it a try.

Just like beer, hard cider, other spirits, and wine, be prepared to take the good with the bad as you explore the world of absinthe.

Please drink responsibly, and take extra care if you decide to play with fire and try the Bohemian Method!