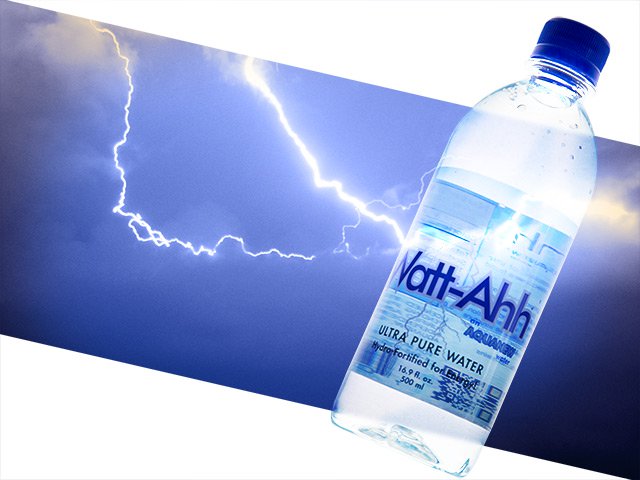 It gives life, it soothes, it cleanses. What is it? Water. Or, in this case Watt-Ahh – an ultra pure water, hydro-fortified for energy. The water is polarized and contains a reservoir of electrons to promote health and energy. While these claims appear rather pedestrian on the surface, the testimonials of Watt-Ahh consumers are nothing short of astounding – each attributing their experiences to the effects of Watt-Ahh. There are accounts of failing internal organ function being restored, nursing animals back to health, and even one unfortunate soul who had seriously injured his hand with a chainsaw who applied Watt-Ahh directly to the wound to aid with healing.

Open wounds healed, infections cleared up, painful burns soothed, Asthma gone, cancer in remission. Taken individually, it's easy to dismiss such claims outright, but there are literally dozens of customer testimonials for every imaginable use and application of this product. There is one common refrain throughout these individuals' experiences: "Watt-Ahh changed my life."

Here is just a sample of the wide variety of uses consumers have found for Watt-Ahh, other than merely drinking it for hydration:

Drinking, healing, cooking, cleaning – all this when founder Robinson “Rob” Gourley simply set out to create a healthy, hydrating and great tasting water. Rob spent his early years working as a mechanic, first in the Virgin Islands specializing in marine work, then in Alaska, tackling equipment for the oil industry. How then, did he come to invent Watt-Ahh? His interest in energy and sustainability merged when he began experimenting with water as a form of energy. A few discoveries and explosions later and he would come to found Watt-Ahh.

"We have twisted the bonds of the water molecule to create the best sports performance and wellness water. It is optimum 'Water with a Twist'." — AquaNew Co-inventor and Founder, Robinson B. Gourley

Thunderstorm in a Bottle!

After sharing his polarized water with friends and family in his newest (and current) hometown of Sarasota, Florida, Rob began receiving surprising reports from people who were noticing physical and emotional improvements after drinking the water; they felt so much better, they encouraged Rob to go into production. In 2007, Rob and his wife Dana introduced Watt-Ahh to the public. Soon after, Watt-Ahh and Advanced Labels began working together to create a label that would be distinctive and appealing. The result was a transparent label with shades of blue that complement the pure water within.

Named for the Watts and Amps involved in the unique polarizing process invented by Rob, Watt-Ahh needed a label that symbolized this. Watt-Ahh delivers electrons to the body, which work with cellular mitochondria to promote energy and health. Similarly, lighting delivers electrons to Earth and reduces oxidative stress. Thus we have a “thunderstorm in a bottle,” appropriately coming from the area of Florida known to be the lighting capital of the United States.

There is an average of 100 days of major thunderstorms across central and southern Florida every year. The area between Tampa and Orlando is known as "Lightning Alley", where there are as many as 50 lightning strikes per square mile each year.

With this inspiration in mind, Watt-Ahh and Advanced Labels Art Director Gary Fozard created an exceptional label with a singular lightning bolt design. The lightning bolt is bold on a clear, transparent label that stands out against a background of a clouded, stormy seascape that can be seen through the water against the inside of the bottle. The labels were produced on our 10 color flexographic press using clear polypropylene stock and a clear laminate. 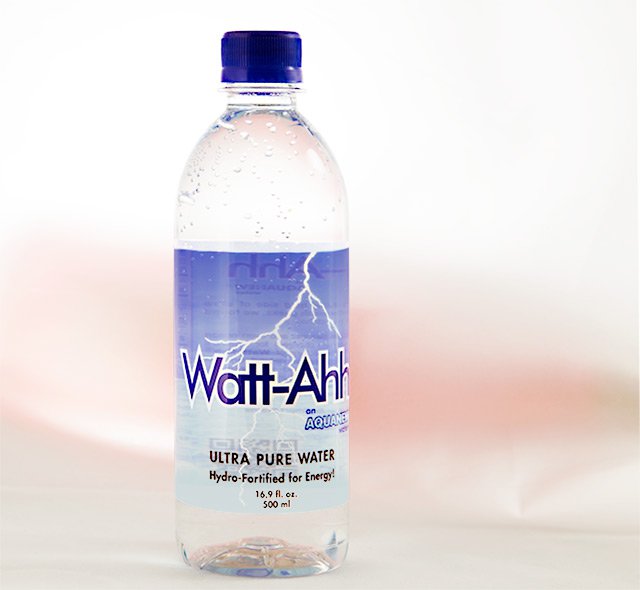 Watt-Ahh is More Than Water

After launching, the testimonials and endorsements kept rolling in. Watt-Ahh was recognized in the 2010 InterBev Beverage Innovation Awards in the Best New Water Category and the Best Health, Wellness, Hydration or Nutrition Initiative Category as well as the 2013 Best Brand Marketing Category, FoodBev Magazine. As customers spread the word and medical doctors research and recommend its benefits, Watt-Ahh is experiencing pronounced growth in 2013-2014.

Not only is Watt-Ahh a versatile product, they also donate part of their proceeds (and water) to charities

that promote improved health, community activism, or emergency preparedness. Returning to Rob’s roots as a marine mechanic, Watt-Ahh is one of the sponsors of Team REDS, a high-speed offshore superboat racing group. The offshore race events raise money for the Suncoast Charities for Children in Rob's hometown of Sarasota, Florida. The Watt-Ahh boat can be seen participating in the Suncoast Grand Prix around July 4th; Team REDS and Watt-Ahh race to raise awareness about issues such as child abuse and bullying. Rob and his water have found a way to support health, engines, and charity.

Disclaimer provided by AquaNew: All products, written information, testimonials and other statements provided on this article have not been evaluated by the Food and Drug Administration. These products are not intended to diagnose, treat, cure or prevent any disease. For all health concerns, please consult with an appropriate licensed healthcare practitioner.