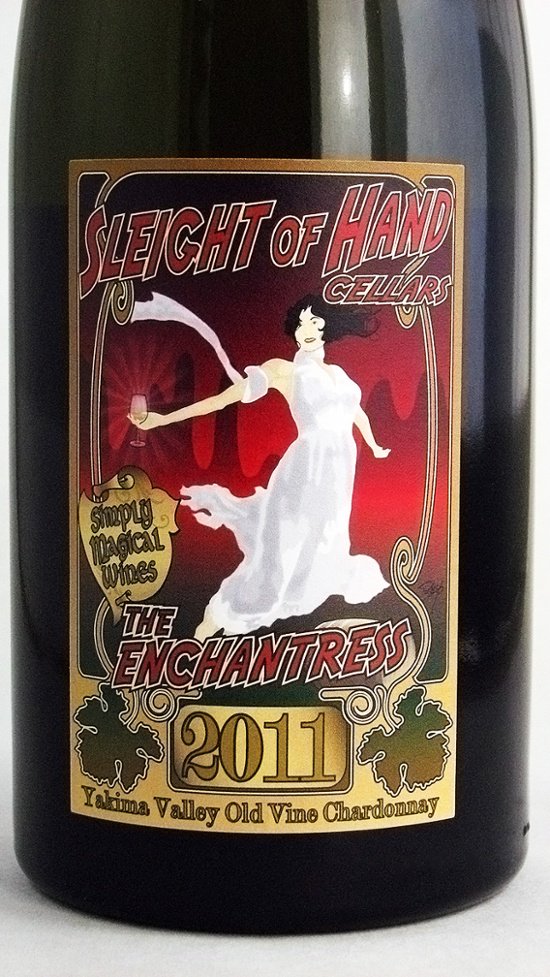 Jen Busch as The Enchantress, as depicted by Professor Phelyx.

Coincidentally, we have selected back-to-back featured labels from companies that both trace their beginnings to Sun Valley, Idaho! You can read about the other featured label from Sun Valley Mustard here.

While attending the 2002 Sun Valley Wine Auction, Jerry and Sandy Solomon happened upon a table occupied by none other than Trey Busch, who was then making the wines for a small Walla Walla winery. Along with the wonderful weather and amazing wines, Jerry and Sandy fell in love with Trey’s charismatic personality… so much so that they invited him to their home for the next three years to host a series of winemaker’s dinners. During the course of these dinners, Jerry and Sandy decided to take a trip to Walla Walla. After just one visit, they knew the place was special… the community of winemakers, the historic downtown, and the beautiful Blue Mountains immediately drew them in. It was then they discovered Trey was looking for a partner for a new winery. 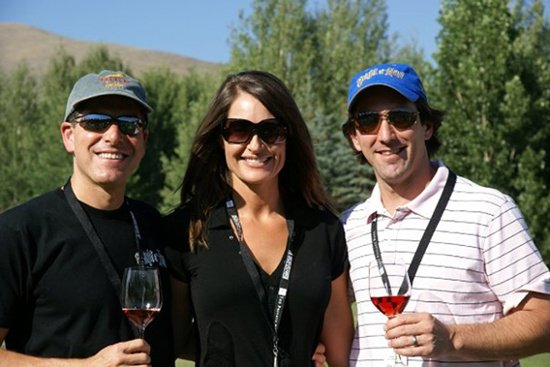 A New Winery is Conjured

Five years after their chance meeting in Sun Valley, the trio’s fast friendship led to a business partnership known as Sleight of Hand Cellars. The winery was launched in 2007, and within a year, Seattle Magazine had named the them as one of the “Next Generation” of up and coming wineries. The following year they were dubbed one of the “Next Cult of Wineries” by the same magazine.

With a focus on crafting exceptional wines made exclusively from Washington state vineyards, the up and coming winery has enjoyed virtually overnight success.

The good press coverage from Seattle Magazine, Wine Spectator Magazine, Lifestyles Magazine, and consistently high wine scores motivate the Sleight of Hand team to make even better wines, year in and year out. Though he’s been in the wine industry for 12 years, Trey credits his sales and marketing background as a significant contributor to the fledgling wineries success. “Before we make a wine, we are always asking ourselves, how will we sell this and who is our customer?”

There’s clearly a focus on fun when it comes to the winery. Trey chose the name from a list of songs Jerry and Sandy provided, which included Sleight of Hand – one of Trey’s favorite Pearl Jam songs, from their 2000 album release Binaural.

“We went straight for the Magician’s theme because of the obvious connection with the name, not to mention there is something magical about making wine,” Trey tells us.

In their quest to design labels that complimented their brand, Sleight of Hand has worked with several different label designers. They were pleased with the early labels, but browsing through vintage magic show posters from the 20’s and 30’s inspired the team to search for someone who could recreate that feel. They soon happened upon the website of a veteran magician and stage performer know as Professor Phelyx. His show posters were the look the winery was after. As Trey explains, “We contacted Phelyx, and it turns out he designed his own show posters. We asked if he would be interested in designing a few labels for us, and he took to the project with total excitement. We were so pleased with the results!” 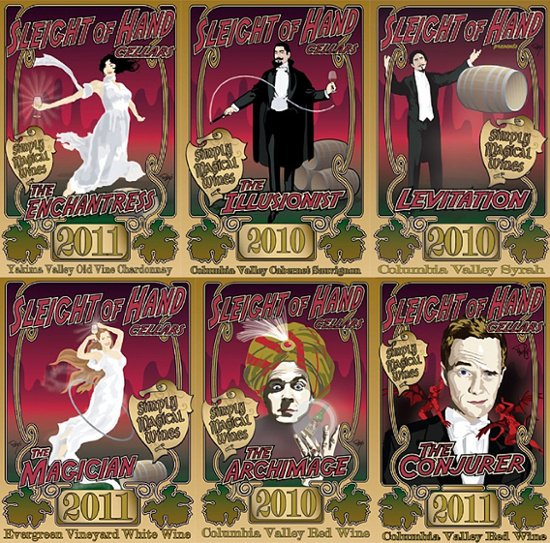 For some added fun, each of the wineries owners, along with Trey’s wife Jen and Professor Phelyx himself, are all depicted in the labels. Jerry’s face can be found on The Spellbinder Red Blend and The Illusionist Cabernet Sauvignon. Sandy is featured on The Magician White Wine and The Magician’s Assistant Rose’. Trey’s likeness appears on the Levitation Syrah, and his wife’s on The Enchantress Chardonnay. Professor Phelyx is on The Archimage Red blend label. When asked to pick a favorite, Trey doesn’t hesitate. “Our newest and most awesome label to date… Neil Patrick Harris on The Conjurer Red Blend!”

The good times continue in the Sleight of Hand Cellars tasting room, which features a turntable and collection of 700 albums to help set the mood.

Drop the needle, down a glass!

Making Magic With Wine and Labels

If you can’t make it down to Walla Walla, you can still join the party by joining the wineries “Wine Illusionist Society” wine club. Membership is filling up fast though, and the club accounts for most of their high end wine sales. Like many wine enthusiasts, the Sleight of Hand team doesn’t worry about the wine number ratings. Of course with nearly every bottle they’ve produced rating at 90 points or above, they have that luxury. They consistently sell out of all the wines, and increasing production to meet the demand of consumers in the 20 states they currently distribute to.

New vintages are in progress, and an all new label is in the works with a design by Trey’s good friend and amazing graphic designer Dave Place of Imperial Design Concerns. The name of the wine is still a secret, but Dave has previously created a Sleight of Hand Cellars label for The Funkadelic Syrah. That wine, named after vineyard owner Rich Funk and a love for all things music related, featured a psychedelic 60s rock poster them and was released with a limited edition hand-pulled silk screened poster. Both the wine and the poster sold out in just a month.

To order wines, posters and other stylish winery merchandise, visit Sleight of Hand Cellars online. And if you’re ever in the Walla Walla area be sure to stop by their tasting room, drop an album on the turntable and create a little magic of your own by making a few glasses of wine disappear!