Product labels as we know them today (a piece of paper that is glued to a surface) first emerged in the 1880s. The paper label format grew from the practice of painting directly on crates and tying tags to packages. A faster and more uniform method for marking products was becoming necessary because of a growing economy that demanded consistency and identification. The new adhesive labels were popular on things like pill bottles and fruit crates. Drug labels were some of the first to be developed because of the need to relay vital and accurate information to the patients.

Labels on fruit crates were becoming necessary because of the emergence of a nationwide marketplace; oranges grown in Southern California could be shipped to New York and labels were needed to identify them. Early labels served the same

purpose as those we see on the retail shelf today, they were meant to outshine the competition, catch the customer’s attention and convey the product and seller information. These early labels are considered collector's items, showcasing vintage marketing and graphic design for many popular brands still around to this day. Be warned though, as with many types of early advertisements, offensive racial stereotypes are unavoidable while searching out your collection.

The Original Technology: Lithography in the 1800s 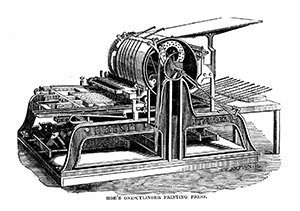 With the new adhesive technique, a gum was used to adhere colorful paper labels to a surface. The gum paste was similar to the adhesive we remember from postage stamps and still encounter on many letter envelopes, you had to lick it or get it wet to activate the stickiness. Lithography was the method of printing used by these first label manufacturers and it became the first commercial art; lithography is the process of printing from a flat surface treated so as to repel the ink except where it is required for printing. Stone lithography was the main technique for reproducing art in color during the 1800s; by the 1880s processes such as embossing and shading could be added to enhance the label design. The first label designs often included beautiful images such as orchards and family portraits and very little text. Label costs were still substantial so businesses would often order large runs and use the same label over a few years.

Avery Invents the Self-Adhesive Label in the 1930s 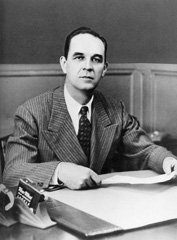 The next big innovation in label printing was the self-adhesive label. R. Stanton Avery invented the first pressure sensitive label in the 1930s. These labels came with a paper surface, a coat of adhesive, and a silicone-coated liner. The "sticker" could be easily removed from the liner and stuck directly to a surface, no licking required. The company he founded in 1935, now known as the Avery Dennison Corporation, is still in the business of making labels and has sales in the billion dollar range. In addition to manufacturing developments, the 1930s also saw a change in label design. The image heavy labels were replaced with more text centric labels that were geared towards marketing to the consumer. For example, food labels began to include things like health benefits and ingredients. During the great depression people wanted to be sure they were getting the most value for their dollar so text with promises of what you were getting inside the package swelled. Increased government regulations also contributed to less art and more text on labels.

Flexography in the 1950s

Early flexographic (flexo for short) printing was originally known as "aniline printing". The name originated with the hazardous analine oil-based inks that were used up until the 1940s when they were banned by the FDA. Safety fears caused analine printing sales to plummet even after new, safe inks were approved by the FDA in 1949. Industry leaders sought to reclaim market share by renaming the printing method, severing any association with analine inks.

In 1951 a contest was held by a trade magazine to rename the printing process and the term "flexographic process" was the clear winner out of more than 200 entries. 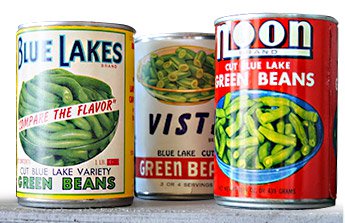 Flexography is essentially a modern version of the letterpress, where printing is accomplished using a rotary relief printing method with flexible plates and fluid inks. It was an improvement over lithographic printing because it could print on thin and flexible materials such as film and vinyl.

In the 1950s label designs saw a further shift away from images to bold lettering with a solid background. Think Coca-Cola and Morton Salt. The self-service supermarket enhanced the need for labeling as products could directly reach the hands of the consumer. They could browse the aisles and read the labels themselves rather than request items from a clerk behind a counter. This propelled the "golden age" of advertising in the 1960s, though some would argue we are still in the golden age as the opportunity for packaging innovation and creativity is unlimited.

Digital Joins Flexo in the 2000s

Today there are many options for anyone needing high quality labels. With great advances in quality, flexography took off in the 1990s and remains a thriving printing process that is used extensively in label printing.

There are benefits to both digital and flexo, and which one you use is dependent on your individual product and label needs. Today label designs vary widely and can include everything from retro to modern and simple to complex. The current quality of label printing, combined with special finishes like embossing, foil stamping, and varnish treatments, make today's labels the most versatile and effective packaging ever. And, creating and printing stellar label designs has never been easier.

If history has taught us anything, more innovations in technology and design are just around the corner.

If you'd like to learn more about digital printing for your labels, please watch our free 20-minute webinar: